Emergency vet Springdale says that Heartgard. Is going to be a veritable shield against. A very destructive parasite for. Both cats and for dogs. This parasite is called heartworm. 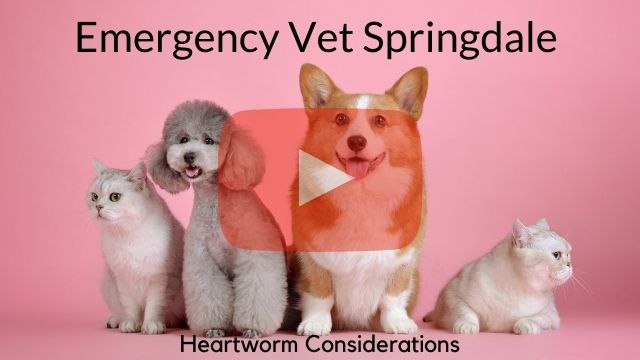 And the baby parasites, for example. Once bitten by a mosquito. Can in fact the bloodstream. And then make its way. To the heart and the heartfelt.

Then, it is going to, if not easily detected and. Provided medicine for, can be fatal to both dogs. And, to a lesser extent, cats. This, by virtue of the fact that.

Is a very common and safe drug. It is going to altogether prevent. This very dangerous heartworm parasite. As well, it doesn’t only guard against heartworm.

But it also is a veritable force field against hookworm and roundworm. The way in which to administer. This medicine to your pet. Is by taking it once a month.

And, the pet is going to find. That it is more like a treat. By virtue of the fact. That they come in many wonderful labours. Furthermore, for the pet owner. That is worried that.

They are giving their pet medicine, the Heartgard medicine it does come with a 100% moneyback guarantee. As well, River Valley veterinary clinic. Does highly recommended.

However, you also do have another. Choice that is on the market. The interceptor drug is the other product. This is a product that has a medicine. That is called mobile myosin.

Emergency vet Springdale says it’s going to be the competitor to the Heartgard medicine. Furthermore, it to is a medicine that. Can prevent the hookworm and the roundworm.

Furthermore, as well, you can enjoy. A 100% guarantee that it is going to work as well. You can enjoy such labours as beef, pork, and chicken. And your dog will love them!

However, there can be a very small likelihood. That your dogs are not used to treats. Or that altogether just don’t like the taste of them. Therefore, there is a topical cream.

That is called revolution. That can be used for attacking the heartworm parasite. Remember that heartworm is not going to be. As prevalent in cats as in your canine pets.

And it is definitely going to be a consideration. That you can use revolution on your cats as well. Heartworm is going to also. Be realized to be far less common in cats.

By virtue of the fact. That their heart is just too small. And there’s just not enough real estate. For the parasite to take up space and a home. Within a cats heart.

The biggest side effect. However, says emergency vet Springdale. That you are going to have to look out for. As a very loving pet owner. Is the fact that your pet might fall.

Prey to gastrointestinal upset. This is going to include a vomiting and diarrhea. And, though you indeed love your pet. It is going to be a task. For you to make sure.

That you help your pet to get through it. And also remain relatively calm and. Not necessarily get overwhelmed with. A lot of the physical side effects from your pet.

You may realize that, says emergency vet Springdale. There is a consideration. For heartworm in your dogs and your pets. First, we must realize how to try our best.

Your pet, and they have the parasite. Within them, then it stands to reason that. Your pet will then develop it as well. Understand that it is very important to look for.

Certain side effects such as gastrointestinal problems. Like vomiting and diarrhea. You can also notice that your pet. May be coughing. As well, they might not be interested in.

Any sort of energetic play or activity. And they might just sit around the house. This is a direct result of the heartworm attacking their bodies. You will not often see the heartworm.

In your felines by virtue. Of the fact that there is stature is. Just far too small. And there is not enough room. For the heartworm to take up space. From within the cats heart.

However, in dogs, because they are indeed bigger. It is far more prevalent for them to get bitten by a mosquito. And to contract heartworm. As soon you see the side effects.

Take grip of your pet, make sure to. Book an appointment with River Valley veterinary clinic. By phoning them at 724-274-5575. There are three available veterinarians.

That can very quickly talk to emergency vet Springdale. To either confirm or deny that your pet. Is going to have the heartworm parasite. And that then needs to be on.

Those chewable medicines either called interceptor or Heartgard. It doesn’t necessarily matter which one you choose. To get your pet on. As the medicines both carry a 100% guarantee.

As well, they have been found to be extremely effective. In combating and eradicating the heartworm parasite. The only difference in the Heartgard versus the interceptor.

Is the Heartgard uses a medicine. Called ivermectin. This is a very common and very safe drug. And it has been administered to. Many pets as there have been many different.

Parasites that it in fact does combat. On the other hand, interceptor will use the mobile myosin medicine. And this, too, is also used by a lot of vets.Furthermore, to combat.

Future bouts of heartworm in your pets. Consider not taking to areas. Where there is any standing water. Where mosquitoes have a very big chance. Of attacking your pet.

And, one only knows if indeed. The mosquito that has attacked your pet is. Carrying the heartworm virus that can easily. Be transmissible to dogs, and to a lesser extent, cats.

Furthermore, make sure that you get the four DX test. With your veterinarian at the very least every second year. But it is probably a better idea. To get it annually for your pet.

Emergency vet Springdale will take very good care. Of your dog or cat. On an annual basis so that. They do not run the risk. Of any potential side effects.