Many pet owners may not realize that oral hygiene can help them avoid needing an emergency vet in Springdale. And while pet owners want the very best for their animals. It is often only to late, when they learn. What they need to do to keep their pets teeth as healthy and clean as possible. 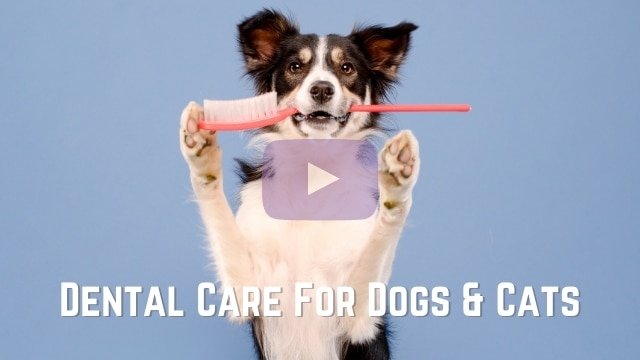 When pets eat, food can get built up on their teeth. Which not only turns into tartar buildup. But the buildup of food, can also promote cavities. Which is going to be very painful for the animal.

If the tartar buildup is not brushed or cleaned off of their teeth. It will eventually harden so much it will feel like cement. And at this point, it is called calculus. And the only way to get rid of it.

Will be to take there animal to a veterinarian, who will put them under general anaesthetic. In order to scrape it off their teeth. Not only is this very stressful for the animal. It is absolutely unnecessary.

The reason why it needs to be scraped off. Is because calculus will turn into gingivitis, as the gums get irritated by the bacteria in the calculus. Causing the gums to become inflamed and sore.

Therefore, pets with periodontal disease. Typically end up being in pain for the majority of their lives. And eventually refusing to eat, because of how painful it is.

More on This Below.

This is white so important that pet owners need to take good care of their pets oral health. So that they can avoid needing to take their pet to an emergency vet in Springdale. For emergency dental surgery.

One of the simplest ways that pet owners can help their pets teeth. Be as healthy as possible, would be feeding them dry pet food. This is because dry food requires chewing. And the chewing motion.

Combined with the crunchy food will scrape their teeth. Getting rid of any stuck on food particles. And scraping tartar buildup off of their teeth at the same time. While dry pet food and what pet food.

Are both nutritionally complete. There is truly no reason why pet owner. Should feed their pet wet food, unless directed by their veterinarian. However, there is truly no substitute for brushing their pets teeth.

They can use a human toothbrush. And by introducing the toothbrush into their dog or cat’s mouth. As early as possible after they adopted them. Can help acclimatized their pet to having their tooth brushed.

Excellently feeding their pet something was xylitol will require brushing the animal to an emergency vet in Springdale. Because even small amounts can be fatal.

If pet owners want more information. About what they need to do to keep their pets teeth as healthy as possible. They should make an appointment at river valley veterinarian hospital.

Pet owners typically want to avoid taking their pet to an emergency vet in Springdale. However, if they are not keeping their pets oral hygiene as good as possible. They may end up requiring emergency dental surgery.

While the gold standard to ensure their pets oral hygiene is brushing. If pet owners have not acclimatized their puppy or kitten to getting their teeth brushed when they are young.

It may be very difficult to try to introduce a toothbrush when they are older. And pet owners may not be willing to put up the fight every single day to brush their pets teeth.

However, all is not lost, there are things that they can do. To help keep their pets teeth as clean and healthy as possible. This would be through the use of dental chewing devices, or dental treats.

The dental treats, are meant to be consumed. And work very similarly to dry pet food. What the potential treat will do, is use the chewing modality, combined with the dry food.

To scrape tartar buildup, as well as food particles off of the dogs teeth. And keep them clean. One of the benefits of dental treats is that it is designed to be consumed. So that an accidental swallowing.

Is not going to cause problems, or require an emergency vet in Springdale visit. Many pet owners to buy something such as a deer antler, or a pig’s ear. And while that works to scrape their teeth clean.

There is a choking hazard if accidentally swallowed. But it is also extremely hard, so it causes a problem of damaging their teeth or gums if it is chewed to hard. Therefore, veterinarians recommend something called an oravet.

Which is a soft type of chew toy, that has been CET approved. It is soft enough, so that it does not cause an obstruction of the bowel if swallowed. Nor will it present a choking hazard to the animal.

And because it is very soft. It does not matter how hard the animal choose the device. They will not hurt their gums or teeth. This can help the animal avoid needing to make a trip to an emergency vet in Springdale.

However, there is truly no substitute to good oral hygiene. Then taking their animal to the veterinarians office once a year. For a routine dental examination. The veterinarian will be able to look inside the animal’s mouth.

To see if they are in good health. And to see if there is anything that the animal needs, in order to keep their teeth in good health. This also can avoid eventually needing an emergency vet Springdale visit down the line. Because the animal has developed cavities, periodontal disease. Or is in a lot of pain for some unknown reason.